“Obviously,” Genet said in an interview in the early 1980s, “I am drawn to peoples in revolt … because I myself have the need to call the whole of society into question.” 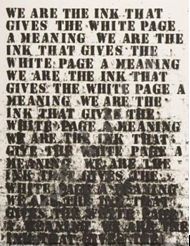 Glenn Ligon, Untitled (We are the ink…), 1992, Private Collection, Boston

Untitled (We are the ink…) refers to a famous quote from Jean Genet’s memoir Prisoner of Love where he states, “In white America the Blacks are the characters in which history is written. They are the ink that gives the white page a meaning.”

One piece of dramaturgy that informed The Living Museum of the Nomad Monad – aka, The Tipi on The Hill – was Jean Genet’s Prisoner of Love. In the ‘60s and ‘70s, Genet dedicated himself to backing the political aspirations of marginal groups – the Red Army Faction, the Black Panthers and the Palestinian Liberation Organization. His posthumously published book is a meditation on his own life by way of the time he spent with the PLO and, less extensively, the Black Panthers.

In 1990, Prisoner of Love was too controversial for publication in the US. We had a friend at the time who was present in meetings at Grove Press where the possible publication was discussed and dismissed for that reason. (Grove Press, the anti-censorship champion, who had given voice to revolutionaries around the world, including Che Guevara and Malcolm X.) The book had been published in the UK in a Picador edition by Pan Press. We had fifty copies shipped to us at the wholesale price with the quixotic notion we could somehow distribute them.

One source of income for the younger, more entrepreneurial residents on the Hill, was selling fake camcorders for up to $400 on Canal Street at night when close inspection was difficult. As victimless crimes go, this ranked high on the scale because the bargain hunters who bought them were complicit in cheating the system and willing to buy what they thought was stolen property.

Making these fake camcorder boxes was itself an art and one day Gabriele paid $20 for a lesson. The (con) artists started with a plain box that they filled with wet newspaper. They then wrapped it in black garbage-bag plastic onto which they glued photos and documentation on camcorders that they cut out from flyers and newspaper ads. The final pièce de résistance was making the object look shrink wrapped, accomplished with cellophane wrap, clear tape, and a steady hand that avoided wrinkles.

With our unsellable stack of Prisoner of Love, Gabriele created a Thieves Theatre version of the box. Instead of wet newspaper, she filled the box with crumpled newspaper and a copy of Genet’s Prisoner of Love, complete with a handmade bookmark that informed the “victim” where they could get a refund if not completely satisfied.

Legend has it I sold enough of these boxes on the street to recover our purchase cost of the fifty books. Much closer to fact, the fake camcorders were featured in exhibits at both Exit Art’s Apartment Store, as well as at Brecht Forum where, poetically, the box was in fact stolen by a Marxist comrade at the exhibit. And in 1995, we gifted the remainder of our copies of Prisoner of Love to JoAnne Akalaitis and Ruth Maleczech who were staging a performance of the work at New York Theatre Workshop.

Reflecting back on the (con) artists’ box work at the Hill, I go to Edmund White’s observation in his foreword to the book: Genet understood that “everyone is of equal value and that each person is priceless.”

FRONT AND BACK OF THE BOOKMARK INSIDE THE BOX

Gabriele created a replica of the fake camcorder box that allowed visitors a look inside for an exhibit in February, 2022 at Canal Street Research Association. 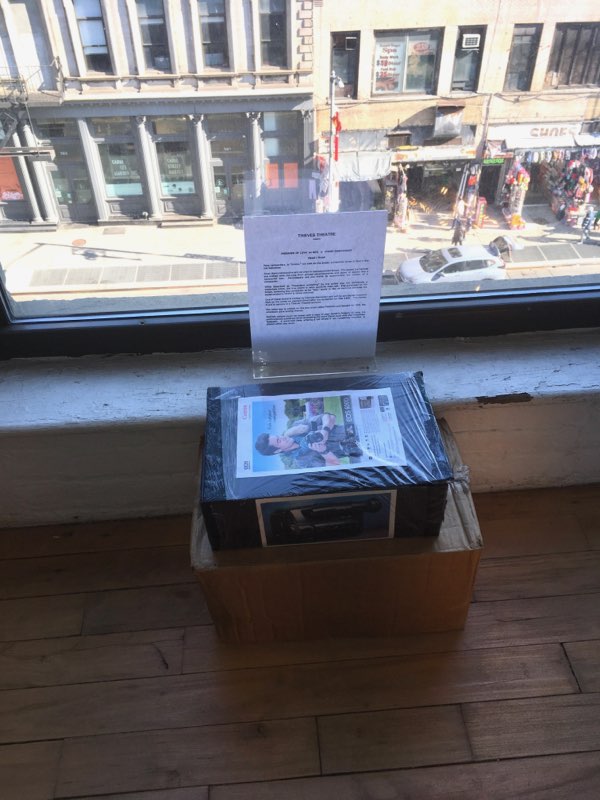 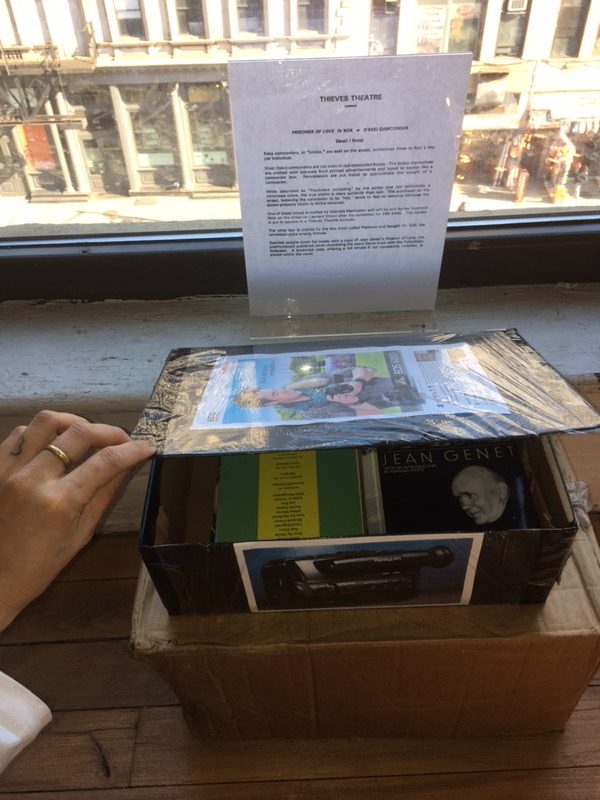