Soon after graduating from the Yale School of Drama, Erik Ehn joined fellow alum Gabriele and her partner Nick in conceiving Thieves Theatre’s  New York incarnation. In 1987, he resigned as co-artistic director to concentrate more fully on his work as playwright. In that pursuit, he discovered that there were numerous small, experimental theaters around the country producing writers like himself — “language playwrights” such as Mac Wellman, Len Jenkin, and Jeffrey Jones. In 1993, he wrote an article calling for these under-the-radar theaters across the country to organize and share resources. He termed his concept Big Cheap Theater or Art Workers Hostelry. The proposal was published in the Yale journal Theatre and drew responses from several theaters nationwide.

In December ’94 the University of Iowa’s Playwrights Workshop sponsored a first meeting. The following theaters were represented:

After this first gathering, the name “RAT” took hold… or “R.A.T.”… or “Rat”… or “rat”– you define it or spell out the acronym as you see fit at any given occasion. Most popular: Regional Alternative Theater, Radical Alternative Theater, raggedyass theater, or just rat, after the resilient rodents surviving and thriving underground.

Critically, in Iowa, founding members exchanged email addresses, a new phenomenon back then. From there, RAT grew quickly, hand-in-glove with the burgeoning new media. It hosted annual conferences in various US cities, facilitated by internet communication that transpired in-between these face-to-face gatherings. Thieves Theatre had implemented an email listserv and website where RAT theatres and individuals articulated common aesthetics and initiated joint theatre productions at the national and, later, international level.

RAT was a marker for the beginning of the digital medium’s direct impact on relationships among theater peers.

Throughout its 10-year history, the press cited RAT as the “regional alternative theatre revolution.” At the same time, it was becoming clear that the bunkers that once protected the press and journals as the sole documenters of theatre were eroding. The numerous theatre listservs, websites, and eventually theatre blogs began undermining the exclusivity of print. The broadcast model of media was ceding ground to the ever-multiplying new social media networks.

The rat-list was an infamous early example of this emerging phenomenon. As an exemplar of this historic evolution, see the rat-list’s extended exchange with David Cote in OFF, the theatre journal he founded. (David would later become Time Out New York’s longest-serving theater editor, 2003-17.) You can also see how the Rat-list exchange transpired on a day-to-day basis at this 1999 -2001 archive.

The RAT Conference website dates back to the earliest days of the World Wide Web, launched during the browser wars between Netscape and Microsoft in 1995.  At the site, Thieves digitized all the documentation from the conferences, thereby giving greater access and credence to the RAT revolution.

In 1998, Gabriele and Seth created the Ratbase [ENTER] , a digital database with an interface in which over 600 quotes from articles, journal entries and RAT listserv postings are catalogued in relationship to one another using an “idea thesaurus” of over a hundred terms, representing the RAT concepts that continually asserted themselves in various forms from various authors. The first interface is ideas talking to other ideas, although at any point thereafter the reader can go to the actual source, author and context of the quote.

But Thieves also helped keep rats grounded and entertained through old media…mail art. Over the years they published and distributed to RATs four artfully crafted zines. The zines were part of Printed Matter’s artists book catalog; two of them were later collected by MoMA (Museum of Modern Art). The little red handbook, however, was much more than simply a zine; it was a hardcopy version of various materials from the RAT Conference website, including documentation of the annual gatherings, theatre manifestos, and the Ratbase. The little red handbook was distributed at the San Francisco conference. Read its introduction for a summation of RAT in October, 2002.

We began as antithesis to the established regional theater model. With a core tenet of inclusiveness, we accepted everyone into RAT, including regional theaters. “Whoever comes, is.”  But an evolving collective of new individuals and theaters gradually slid away from RAT’s original aspirations. The noncommercial, fringe, and gift-centered essence of the confederacy was no longer central to the majority of the individuals and groups.

So in 2004, key co-conspirators of the RAT Conference met in a Las Vegas boardroom and dissolved the experiment. 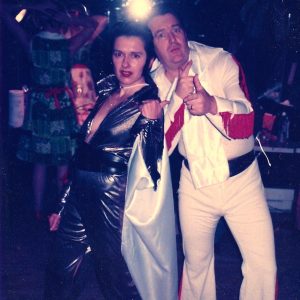 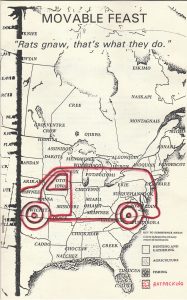 Check out the RAT Zines!