Rumor and legend have it that eunuchs more than made up for their lack of function in one area of lovemaking with expertise in another. The eunuchs could do amazing things with their tongues: so much so that all the harem women found their true pleasures not in the occasional couplings with the king but with their daily, secret trysts with the eunuchs.

The power structure within the harem/eunuch family was quite complex, necessitating secret pacts at every level. Becoming the king’s favorite was not enough for the harem members, for the harem itself was testament to the king’s need for varieties of religious experience. And although technically the eunuchs were servants to the harem, they were in many ways the masters, able to give or withdraw the secret praise of their soothing tongues at will–tongues that brought such exquisite momentary pleasure and illusionary relief from the tyranny that ruled all. These tongues were ever so objective in their scholarship of pleasure. Incapable of pleasure themselves, the eunuchs had extraordinary insight into the aesthetics of power and illusion that the need for pleasure and its satiety produced.

It came about in this little family of King’s Players that the most powerful and influential individual was a certain eunuch known for his “biting tongue.” However, this biting tongue technique–as honed and satisfying as it was–also became this eunuch’s downfall. Other eunuchs became jealous of his profound influence on the harem. So much so that they willingly compromised their own secret trysts with the harem by reporting the eunuch with the biting tongue to the king. Taking a stance of moral indignation, they told the king of the perversity to which the whole harem was falling prey.

In his “investigation” of this eunuch, the king discovered a whole new world of pleasures that had previously been unknown to him. Soon the king’s nocturnal pleasures were satisfied equally by his eunuchs and his harem. However, the eunuch with the biting tongue was executed. Speculation was that his technique was better suited to the harem than the king.

An so the power structure within the harem/eunuch family changed again. Some harem members became mere servants to certain eunuchs; some eunuchs devoted themselves solely to certain harem members; but all was well in the kingdom. The king’s pleasures became more democratic and encompassing. The eunuch with the biting tongue was dead. And now it was unlikely that any new technique and attendant conspiracies would develop from a covert liaison with the eunuch/harem family. The king was privy to all, and all was in his service.

In the momentary escapes that pleasure provided the king, an illusion mingled with a kind of nostalgia as he came floating back to reality. He would awaken with a sense of loss and vague premonition. Similar were the daydreams that preoccupied the harem and eunuchs in this new world order. More reality than dream. On the outskirts of the kingdom, the harem became again, as always, a coven of witches, the eunuchs became again, as always, warriors. This strange tribe of Critics and Artists is again, as always, brewing and perfecting the delivery of a plague called Theater. 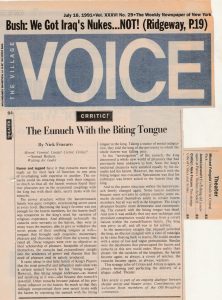