When Gabriele worked as development director at Coney Island USA, John Bradshaw ran the ten-in-one sideshow that worked the summers there. One of John’s performers was Otis Jordan. Otis was billed as “The World’s Only Human Cigarette Factory” As John would say in the bally to the crowd gathering outside the sideshow entrance on the boardwalk, “It’s amazing folks. Watch him roll a cigarette, light the match and then smoke that cigarette using only the lips of his mouth.”

During the off season, John sold Ginsu Knives or something like that. He was probably a good salesman, but he thrived on his sideshow carny life more than anything. He loved bringing them in. The over-the-top hyperbole, winking at the crowd even as you emphatically proclaim, “It’s all true, folks!! It’s all real!!” He’d take the “slightly dishonest” buck over the so-called honest one any day.

But this presents an incomplete picture of John Bradshaw. To some he may have looked more like an exploiter than promoter of Otis Jordan. But even more than just a promoter, he was Otis’s caretaker and close friend, his family away from home.

During the season, Otis lived with John and his family in an apartment they rented in Brooklyn. Otis needed someone to take care of him most of the time. He could roll his own cigarette, but there are many things someone with no arms or legs needs help with throughout each day. I’ve seen a video in which an ignorant interviewer asks Otis how he made a living in the off-season. Straight-faced, Otis answered, “I drive a truck.” But in fact, even though Otis had actually outfitted a car he could drive, in the off-season Otis had no income and was completely dependent on friends and family. By the time Otis reached Coney he was 50-some years old and had been around the sideshow block a few times. In less politically correct times he had been billed simply as “The Frog Boy.”

One late-summer day in 1991, John was carrying his youngest child on a sidewalk near his Brooklyn apartment when a stray bullet from somewhere pierced the baby’s leg. So after a six season run, “Bradshaw’s Circus of World Curiosities” was finished with Brooklyn and Coney Island. A short time later Otis died of kidney failure at family’s home in Georgia.

Without Otis, the Sideshow now had only “self-made freaks” – tattooed men, bearded ladies, sword swallowers, fire eaters, and such. So when in 1994 the NEA withdrew the Sideshow’s grant on grounds that the show was exploitative, no real “freaks of nature” were even working there. The NEA had funded Coney Island USA throughout the days when “The World’s Only Human Cigarette Factory” was one of the acts, so now what it was really doing was redefining art with the help of Jesse Helms and others. This was only one of numerous examples of what was being done in this era of the “NEA Four.” During this same period of time the Coney Island Sideshow had been sent on tour to Europe with money from Phillip Morris, some of the same tobacco money that helped keep our good Senator from North Carolina in power. To contemplate on the tangle of ironies here is to contemplate on the gloriously ridiculous state of Late Capital itself and how art is woven into its fabric.

A theater peer of mine once said we should weigh our need to do theater against the other needs of action in the world. We should judge the necessity of a play about a cure to a disease against the discovery of the serum for that disease. So I think of that necessity that puts Otis on his sideshow stage. And the necessity of the IMAGE of  “The Frog Boy” on the sideshow banner that sells his show.

As we all try to do, Otis eked out his dignity in this world. Not the least among the other accomplishments in his life was the one that earned him a living; he could “roll a cigarette, light the match and then smoke that cigarette using only the lips of his mouth.”

The late great Marlboro Man on his billboard was a poser. Otis was the true archetype. The IMAGE of the individual in command of his domain. “The World’s Only Human Cigarette Factory” or “The Frog Boy” was never meant to compete for space on the Lincoln Center’s marquee or buy a billboard along some interstate. This larger-than-life IMAGE was owned and operated by that Ginsu Knife salesman and his friend Otis in the so-short season of their Sideshow Banner. 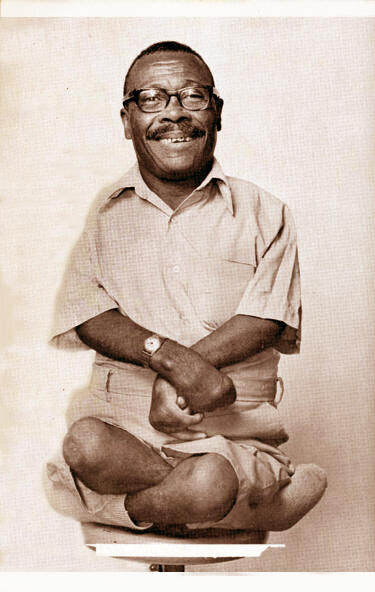 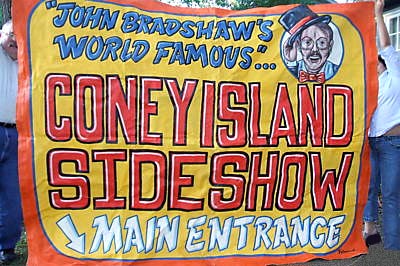