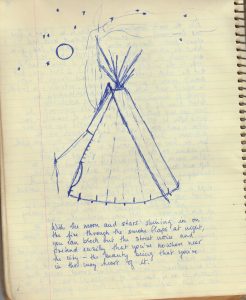 In preparing the dirt floor, tilling the ground under the tipi, we had discovered the roots of a tree. I supposed these roots belonged to the lone tree of the Hill’s historical landscape that the Polaroid had captured. Prompted by the enigma, I visited the Manhattan history section at the Central Library seeking to learn more about the site’s past. I read every document I could find and pieced together an intriguing origin story, the roots of the landscape.

In 1609, Henry Hudson reached the tip of Manhattan Island and twenty-eight canoes full of men, women, and children met him there and brought him ashore to meet their chief, who welcomed and fed him. Later, Hudson returned the hospitality by inviting the chief and others on board his ship and treating them to brandy. This was the first time these Indians had encountered this spirit. They all got very drunk. Centuries later, the Delawares still had among their traditional ceremonies an enactment of the supernatural awe felt at the sight of the great winged vessel, the grand welcoming dance, and a garbled account of the drinking incident. They said the name Mannahattanik meant “the place where we all were drunk.” These Indians that Hudson first encountered were probably the Warpoes.

Until two hundred years ago, the Hill site was the northeast bank of a 46-acre, fresh-water pond called the Kalch-Hook, or Collect Pond. It extended west down to Centre Street and south almost to City Hall. The only historical evidence of an Indian village in southern Manhattan was found on the banks of this pond. Records show that Collect Pond was surrounded by some hills. And on one of these hills lived the Warpoes. Warpoes was either the name of the tribe, the village or the chief. No one is sure. But it is likely that the infamous $24 sale of Manhattan was transacted with this tribe. Warpoes has been translated as meaning “little hill.”

All through Colonial times, the drinking water came from Collect Pond. But the waste from the tanning and slaughterhouse industries operating along its banks eventually polluted it. Once the water was undrinkable, the pond became a dumping place for all kinds of garbage and began to stink and fester typhus and cholera. So the city built a canal to drain it, thus the name Canal Street. They filled Kalch-Hook by using the dirt from the surrounding hills, remnants of the Warpoes. Then in 1836, the first jail in the city was built on the site. It got its name – the Tombs – from its Egyptian architecture. Later, it was torn down and rebuilt, minus the Egyptian architecture. But it was still called the Tombs. Today, Central Booking at 100 Centre Street is being rebuilt again. But it will still be called the Tombs. If you go down to the area now you can see nearby three separate fenced-in archeological digs going on, the African Burial Ground, the notorious Five Points slum, and a Native American site…

These archeological digs confirmed that there were histories on top of histories buried at the Hill and surrounding landscape. But what was most wondrous about this history was that likely the first human word for the site was “warpoes.” And that after all of the years of constant and major changes, with all of Manhattan now almost completely leveled into grids of paved streets, “little hill” was still the most apt geographical description of the site. From every street direction, the Hill is at the pinnacle of a slight incline. The intersection is at the highest point on east-west Canal Street and the highest point on the north-south streets of Forsyth and Chrystie.

Although no institution, governmental or otherwise, had authorized the tipi’s installation, after a few weeks with 80,000+ vehicles and countless pedestrians passing by it daily, it must have resembled some type of program sanctioned by the powers-that-be. With the tipi at its center, the shantytown almost immediately became an eccentric attraction. City tour buses would park just outside on Canal Street. Hard to imagine what exposition the tour guides scripted as an explanation for what tourists were seeing. Church groups brought teenagers carrying prepared meals in exchange for the story of the Hill. Some teachers even brought their middle school and high school students up as a field trip to meet us and the other shanty dwellers.

Gabriele and I had told the origin story of the Hill first. We would congregate with our neighbors and visitors inside the tipi, where Gabriele had hung her Tarot cards, portraits of our shantytown neighbors. The portraits Gabriele drew became living court cards. Hung as the inner lining of the tipi, her models were endowed and special. They had become royalty – the Kings, Queens, Knights, and Pages of the Hill.

These kings and queens of the Hill enjoyed sitting around the fire within the circle of displayed images of themselves. Gradually each of them would also tell their own version of the origin tale to visitors, coloring the history, each in their own inimitable way, sometimes relating their own visit to the contemporary Tombs.

The Hill was enclosed by the Manhattan Bridge plaza walls. At its southern end, the earth declined in a sharp twenty-foot slope making it impossible to build any type of upright structure. The most idiosyncratic and isolated resident on the Hill, even more so than Mister Lee, was the middle-aged Asian man who had built his home on this southern slope. Everyone referred to this man with no name or identity simply as the Chinese man. He built his dwelling as an intricate tunnel and small cave structure into the downward slope of this little hill. From the outside, one could only see the three tunnel openings and the small 2 x 2 foot flat roofing material. You would need to crawl into one of the openings on all fours to see how expansive and elaborate this cave dwelling was. No one other than the Chinese man ever did, so similar to Mister Lee’s House of the United Nations, the interior of this dwelling was left to the imagination and lore.

The Chinese man and his dwelling predated all of the other structures on the Hill. I tried to talk to him a few times. He just waved me off as he shook his head no. After that, upon our rare encounters – I took him to be a hermit in disposition – I would simply raise my hand in acknowledgement. Soon he returned the gesture. And eventually, reluctantly, he even initiated a rudimentary hello.

An artist named Mel Chin visited me a couple times at the tipi. His work consisted of making land art projects across the country. He said he always worked in consultation with Chinese geomancers. The geomancers had told him that the Hill was a very powerful site. They called it the Mouth of the Dragon. He said he thought the Chinese man living on the Hill was also a geomancer. This intrigued me, so I read all that I could find on geomancy and feng shui.

When Mel Chin visited me a second time, I was disappointed. After all that I had read, I wanted to talk to him in more detail about geomancy and the Hill. “Forget about all that. I was a little drunk that night.” I did forget about Mel Chin, but I couldn’t forget what he had said and what I had read on geomancy.

The landscape began speaking in its subtle way, most palpably at night sleeping on the ground next to the fire in the tipi after the busyness and human politics of the day faded away, leaving me with just my breath and the breath of Gabriele sleeping next to me. Looking up into the night sky through the lodge poles, we were the first humans as we were also the last. Through the almost three years we lived there, this time right before sleep, and then just before dawn beneath the same lodge poles, accrued depth and meaning. A sacred dimension opened, the Self settled into the lodge poles and the night sky, and then into its final surrender to the earth and its destiny. The earth never sleeps, but it does dream. And twenty yards from us, the Chinese geomancer in his cave dwelling at the south slope of the Hill was the interpreter of those dreams. 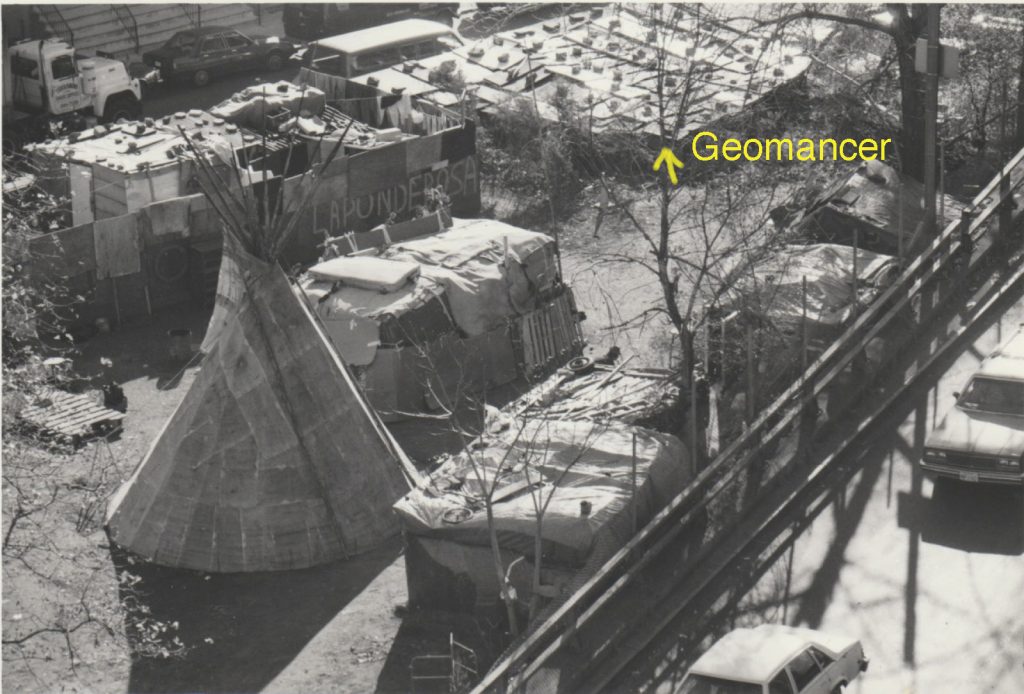