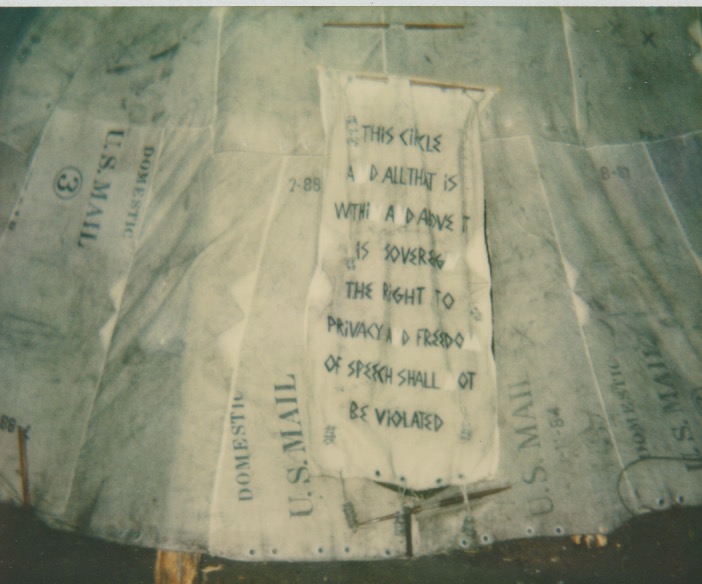 “You should know, if this tipi were being disrespected, as John King said, AIM would bring a hundred Indians to tear it down.”

Chayton put this statement to me as a challenge, a thinly veiled threat. I decided that what I said next should be my final word.

I walked over to the edge of the tipi, reached into my canvas mailbag and pulled out a meticulously detailed white t-shirt.  I handed it to Mika who was still seated on the ground.

“The morning after the commemoration I woke up to find this inside the door. Someone had secretly placed it in here sometime during the night. At the ceremony I had read the words of the commemoration off a piece of paper I held up. The last words were ones I had memorized “This tipi was erected in remembrance of the lives lost in 1890 and in recognition of the sovereignty and dignity of all disenfranchised individuals today.”  I’m not sure how much meaning those words had to the gathered, but the ones I spoke afterwards I made personal. I looked each individual who lived here in the eyes, one at a time as I spoke, and said ‘If anyone, just one person, does anything to disrespect this tipi, this memorial, I will burn it down. I’m not playing. I’ll burn it down. If one person disrespects it, it’s going up in flames. Gabriele and I are asking each of you to watch over it. It’s your memorial. Respect and protect it.”

I pointed to the shirt that I had given Mika. She had been inspecting the design and symbols on it. “I say the same thing to you now. Make the same promise to you. If the day comes when this tipi should be burned down because it’s being disrespected, I’ll be the one doing it. It’s now part of my life and fate. This shirt, and whoever gifted it to me, I think of as also part of the tipi’s fate. I haven’t worn that shirt yet, but I will be wearing it that day, if it comes. I believe it was gifted to me as a guide and to protect me in whatever action I need to take.”

Mika stood up quickly and walked the couple steps over to Chayton’s side. She handed him the shirt, pointing to one of the painted images on it. They looked at the shirt, then long at each other without speaking, then nodded to one another as if in agreement. Chayton reached into his pocket, pulled out a button and offered it to me. The white two-inch button had AMERICAN INDIAN MOVEMENT written in red in a circle around a logo. The black lettering on the inner circle around the logo read REMEMBER WOUNDED KNEE with the dates 1890 1973 1990.

“This is a gift to you. From me and Mika. It’s from the AIM pow wow we attended December 29th commemorating the centenary and our occupation of Wounded Knee in 1973. There was a discussion there with a few members about your tipi and your commemoration. People were very divided. Mostly negative because no one knew who you were, presumed you were non-native, and also knowing the site was a homeless encampment with drug and alcohol use. Mika and I can see that you are treating the tipi with respect. We feel we should give you the same respect. We will be unlikely to convince most AIM members to acknowledge the same, but hopefully this button will show others who might visit that you have support from some.”

Mika walked over to hand me back the shirt. She pointed out the red AIM logo among the other images on the shirt. It was the same logo as on the button they had just given me. The logo was somewhat obscured, almost indiscernible within the design. “Besides us, it seems at least one other member of AIM already supports you.” She stepped back next to Chayton. “I would like to meet your wife to talk to her about the tipi, especially the symbols on the inner lining. I know nothing about Tarot.”

Chayton nodded in agreement. “Yes, I would too. These portraits are beautiful.”

“Gabriele is around a lot, but she works her day job. She also works mine much of the time. I know she would love to talk to you. Tarot is our spiritual language and guide. She built the tipi cover by sewing together seventy-eight of these opened mailbags. Seventy-eight is the number of cards in the tarot deck. The drawings on the inner lining are her interpretations of the Minor Arcana with the portraits being the court cards. We had read that the inner lining of a tipi was often illustrated to tell the story of the tribe. Her portraits are the kings and queens of a story that is being told to her as we live with our neighbors here. They visit individually often to sit with her in the tipi, confessing the stories of their lives. Most have drug addictions and the risky and often criminal lifestyles needed to support that. Those who use heroin all have AIDS from shared needles. For many of them their story will end here on the Hill.”

Chayton looked around at the portraits and Tarot drawings again. “Because of our work, we don’t share phone numbers with those not in the Movement, but we would like to return, visit with you again, and hopefully with your wife. Thank you for sharing your story with us. We will also talk to our friends upstate about you, maybe have you visit us there. We will have our stories to share then. We have a sweat lodge. I want to talk to them about inviting you.”

I pointed to the three of hearts drawing that Chayton had been scrutinizing before. “You were drawn to that drawing when you first entered. Incredibly, it seems to have predicted what has happened. The three of cups in Tarot signifies a group of people coming together with open hearts and minds to celebrate important events. Gabriele will be amazed when I tell her about your visit.”

We walked outside together and stood briefly at the door. Chayton pointed to the door flap and the words written on it. THIS CIRCLE AND ALL THAT IS WITHIN OR ABOVE IT IS SOVEREIGN THE RIGHT TO PRIVACY AND FREEDOM OF SPEECH SHALL NOT BE VIOLATED

“When the cops walk up here, they like to open the door flap with their nightstick to peek in. Of course, these words don’t stop them from doing that. I just thought the words on the door would be a reminder of the law. That they don’t have the legal right to just walk in without a warrant. Likewise, all the structures up here are also homes with Fourth Amendment protections.”

“Best of luck with that.” Chayton said with an ironic smile as he and Mika walked away. “See you again.”

As I watched them leave, I replayed their visit in my mind, trying to remember the turning point in our conversation where they not only accepted but now welcomed us and the Tipi on the Hill. I walked back inside. I still had the shirt in my hand. My Ghost Shirt.

I refolded the Ghost Shirt and put it back in the canvas mailbag, the same mailbag where I kept the Polaroid, the Tarot deck, the concrete poems, and other items I believed to be spiritually endowed. Looking at the portraits, displayed among the Minor Arcana of the Tarot tipi, I received a momentary revelation of what was to come…. how the individual stories of the Kings and Queens were converging. A story that was dying, ending, even as it was being created and told. I felt elation. But that was tinged with trepidation. Everyone carries the apocalypse, individual and collective, within them. This was the beginning of a story that was already outlining its ending. I needed to be prepared. 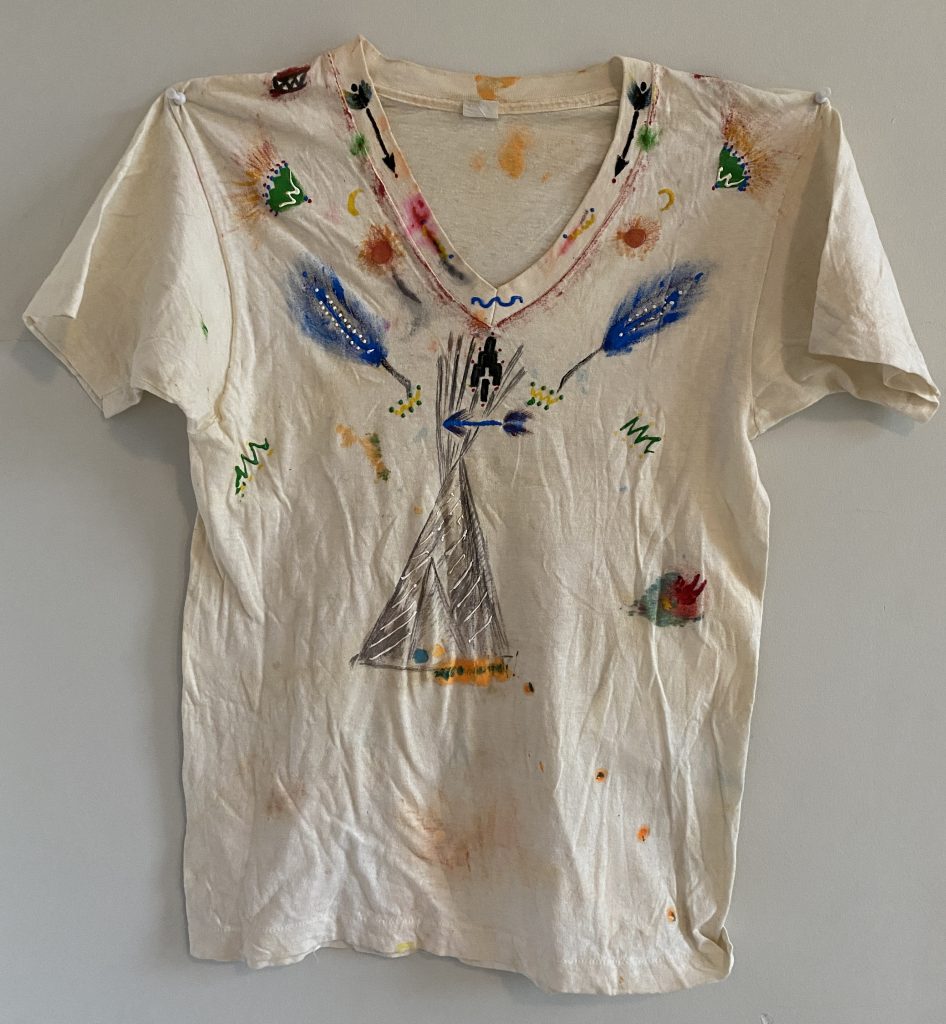 Engage with Nick here about hybrid literary genres crossing the fiction/nonfiction border. This inquiry is being written, and should ideally be read, contemporaneously with the excerpts. For the section that is current to this post, use this bookmark link.