The apartment at first was a refuge, providing brief escapes back into our previous lifestyle, but we became as addicted to the Hill as the others. Except for the day jobs, one or both of us spent day and night on the Hill, and the behaviors, routines, and ethos of our old life soon evaporated. We belonged to the Hill and the Hill belonged to us.

So my days were unencumbered, open to the study of the self in its new environment. The enigma of the Polaroid, with its disappearing, reappearing tree and its perspective alterations, engendered a belief that centuries of history were animating the present incarnation of the Hill and its adjacent neighborhood. The Chinese geomancers’ designation of the Hill as the Mouth of the Dragon, the center of Yang energy in the landscape, further confirmed my conviction and ushered me into a primitive mindset, that of the hunter-gatherer.

The hunter-gatherer, in its various forms, was also the best characterization of the lifestyle of all my Hill neighbors.

Everyone had their own unique daily needs, and of course sustenance for those with habits and addictions was much more demanding. The underground cash economy of exploited labor in Chinatown offered unlimited day work to the able-bodied, but usually demanded scheduling and reliability that made it an untenable option for those with addictions. No worries though, the sidewalks and streets were bountiful, and most found their livelihood there. The City was an inverted, perverted natural landscape, littered with trashed, neglected, unused, unguarded, and sometimes gifted goods.

Although the territory for my hunting and gathering was essentially the same as that of my neighbors, I sought a very different bounty. My hunt was two-pronged, both search and research. My walks were an investigation meant to interlace with my library research on the history of the area, from the Lenape village of the 1600’s to present-day Chinatown.

Drifter rather than walker, I strayed in my strolls, always deviating from the sidewalks and other sanctioned walkways to discover overlooked pathways and hidden nooks. The visible landscape was augmented by the soundscape and smellscape, creating a library of images, faces, odors, dins, ideas, and notions. I wanted this living library to meld with my research library of the past to discover the genius loci, “spirit of the place.” In order to divine the future of the Hill, I was seeking evidence of synchronicity and continuum between the past and present.

Graffiti covered nearly every building in the area. I studied it as one would study prehistoric pictograms. I saw the graffiti tags as akin to the glyphs etched onto rocks and walls by ancient tribes. All the storefronts were fitted with gray steel security grates that were rolled down at close of business each day, offering a nighttime canvas for graffiti. Over them hung the awnings with Chinese logograms. Conflating these Chinese characters with the graffiti, I created a visual language outside rational meaning, similar to Tarot card readings, initiating a dreamscape for divination.

I did the intricate research on the neighborhood’s history at the Main Library, but that meant taking a train to Bryant Park, so most days I was at the Chatham Square Library, which was just a couple blocks from the Hill. Its shelves contained more books in the Chinese language than the rest of the city’s public libraries combined, but it also had an extensive collection of English language books on Chinese history and Chinatown.

The ancestor of Chinese writing is “oracle bone script.” These are divinatory texts written on turtle shells. The diviner would ask questions of the deities, then heat a steel rod in the fire and place it on the turtle shell. The answer was found in the way the shell cracked from the heat. They carved both the answer and the question into the shell.

I xeroxed two pages of these pictogram characters with their translations and put them in my medicine bag. Most mornings when I left for my walk I carried them with me. They often served as a key to the day’s divination, unlocking the conflation of graffiti and the modern cursive Chinese characters of the visual dreamscape. Many days I saw an element in a graffiti tag that resembled the bone script

(person) on the same wall as an element resembling

(hill).  This told me that I needed to deal with some “person” or persons at the “hill.” There were always disruptions in the norm, but finding these two signs proximate to one another meant whatever current situation had developed needed immediate attention. Meditating on the images helped make clear what action or non-action I should take.

Graffiti tags with elements similar to these “hill” and “person” bone scripts seemed ubiquitous. Likely this was due to my own predisposition to see these two scripts, being that my mind was always crowded with thoughts and concerns about relationships with my Hill neighbors.

One day I saw a fresh tag of something I had not seen before. The two scripts entwined. 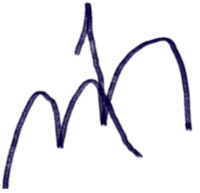 I was startled by its appearance but I knew instantly that it was an ill omen. A couple months prior, Tito had claimed he was going to the hospital, but no one knew which hospital, or whether in fact he had even gone. In any case, he was missing, maybe dead. His hut had been taken over by the brother Billy, and he had been allowing a crippled woman named Coco and another woman Jennifer to stay there. Yesterday Coco started selling drugs from the hut. Everyone was upset and trying to decide what to do about it. If drug dealing was allowed, this would dramatically change the Hill. The “writing was on the wall.” 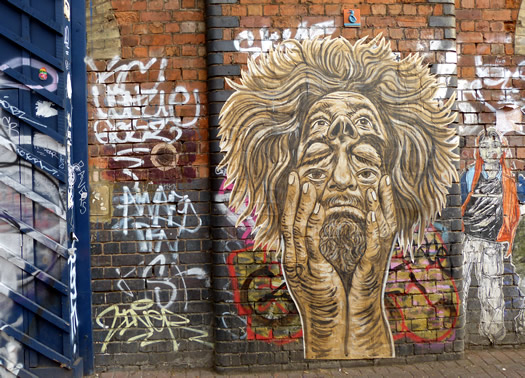