I was startled by its appearance but I knew instantly that it was an ill omen. A couple months prior, Tito had claimed he was going to the hospital, but no one knew which hospital, or whether in fact he had even gone. In any case, he was missing, maybe dead. His hut had been taken over by the brother Billy, and he had been allowing a crippled woman named Coco and another woman Jennifer to stay there. Yesterday Coco started selling drugs from the hut. Everyone was upset and trying to decide what to do about it. If drug dealing was allowed, this would dramatically change the Hill. The “writing was on the wall.”

The oracle bone script divinations based in pyromancy and plastromancy (plastron is the undershell of a turtle), uncannily matched my own morning fire and turtle ritual. In tracing the pentagram of the Thieves Theatre logo into the live embers of the fire pit ash, I meditated upon what my intention for the day would be. On leaving the tipi, I looked for Tortuga’s head rising above the pond water. The direction it was facing determined the course of my morning stalk for the genius loci.

One day, when Tortuga had once again pointed me toward the library, I uncovered an incredible piece of historical synchronicity. Unbelievably, the name for the site, “the Hill,” dated back into prehistory! It was found in the aboriginal language of the Delaware people. What I discovered next would further confirm the validity of my beliefs in the metaphysical nature of the Hill.

The name Manhattan comes from the Lenape “Manahatta,” meaning “hilly island.” The only documented evidence of an Indian village in southern Manhattan was on the banks of a large body of freshwater called Collect Pond. The highest hill in southern Manhattan was on its northeast bank. Next to it was a somewhat lower hillock, where a small band of the Munsee tribe, the northernmost division of the Lenape, lived. The infamous $24 sale of the “hilly island” between the Dutch and the Indians was transacted here at “Warpoes,” the name of the site. Warpoes translates as “little hill.”

Topographically, the Hill was also literally the little hill – the apex of a slight incline from every direction, the highest point of land in lower Manhattan, as it had been for centuries. The discovery of this continuum and synchronicity of the “little hill” confirmed the existence of the visible dreamscape of graffiti, Chinese ideograms, and oracle bone script of my walks. I was clearly living at a sacred site where time stared back at itself, where the future and the past were also the present, where the Cosmos was a timeless Living Creature. I was living within the Mouth of the Dragon, from where the genius loci animated the World.

The Hill was the center of an expanding Chinatown. To the west was Old Chinatown and to the east, New Chinatown. Most of the neighborhood sat atop of what was, three centuries ago, Collect Pond –an evocative and apt name, metaphor for the gradual transformation of the pristine land of the Lenape into the present collection of man-made concrete usurpations.

Nature, as a whole, is a living organism, with humans as the brain cells of that organism. When the European brain usurped control from the Lenape brain, nature began gradually transmuting into its perversion, the City. From the 1624 “sale” of the land to the tenements of the notorious Five Points neighborhood of 1824, the little hill’s surrounding landscape had mutated into the perversion within that perversion of the City, the Slum.

In its pristine state, Collect Pond was a body of freshwater that occupied about 50 acres, was 60 feet deep, and bountiful with fish. For the first two centuries of European settlement in Manhattan, it was the main source of the water supply. But as the city grew, various commercial enterprises moved in along its shore in order to use the water. These slaughterhouses, breweries, pottery works, and tanneries dumped their waste into the water, so that by the late 18th century the pond was considered nothing more than a common sewer and hazardous to health.

Beginning in 1802, workmen began flattening the surrounding hills to be used as landfill for the putrid pond, including the two largest hills, Warpoes – “little hill,” called Mount Pleasant at that time – and its adjacent higher peak known as Bayard’s Point. This meant removing the old Bayard family crypt which had been carved into the bottom of the hill. The Bayard family had previously moved their deceased loved ones to burial plots elsewhere in the city, so the crypt was empty of the dead, but not unoccupied.

There was no term like “homeless” back then, but one of the “ragman” or “hermits” of the city had turned the crypt into his home. Work on levelling the hill was halted until one day the ragman hermit was found dead in his home.

When I found the story of the ragman hermit, I xeroxed the page from the reference book, another talisman to be added to my medicine bag. The city had been recently clearing homeless encampments, but I knew now the Hill was beyond its jurisdiction, belonging to a greater domain. The spirit of the ragman and hermit was its protector. The enigmatic soil of the Hill was a site for the eternal recurrence of history, and I saw the personification of that spirit in the two odd men out on the Hill: The Chinese geomancer was the Hermit living in his underground hermitage. Mister Lee was the Ragman living in his tied-together patchwork hut. 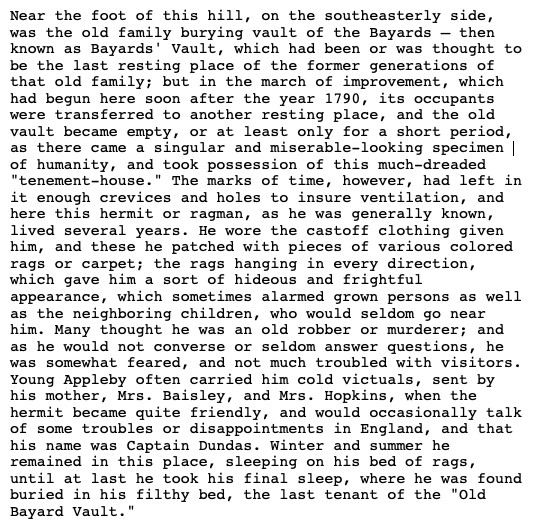