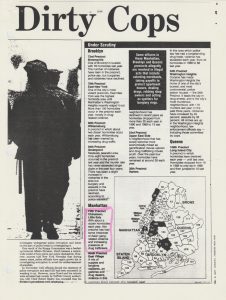 Frack was the linebacker-sized black cop. Frick was a hippie-biker looking white cop who most often did the talking. “Say hey, Kelly. What have the skells got going here?”

I had not met Kelly before today, but I could tell he didn’t like Frick, or Frack. He knew, like everyone knew, they were bad cops. “I’m not sure. I’m going to bring a couple of them down to the precinct to try to figure it out.”

“Who are you bringing in? Not Chief here I hope.” Frick walked up to me with his usual half-mocking, half-threatening greeting. Momentarily raising his right open palm in the pop-cultural Indian “How” gesture, then closing his hand into a fist and mimicking pulling a hangman’s noose around his neck while contorting his face. “How’s it hanging? You don’t want to bring Chief in. Might cause some tribal unrest. He’s got friends in high places, don’t you, Chief.”

Frick knew little more than me about these high-placed friends, and I knew nothing. There were many conjectures floating around, most suggesting that I wasn’t the person I presented myself to be.

Kelly pointed to the knife. “He was standing frozen in place here over that bloody knife.”

“What do you mean standing frozen? Did he look like this?” Frick assumed a comic version of the Qigong posture. “Like he was hugging someone or something?” Kelly nodded and Frick pointed to Sara D. Roosevelt Park a few yards away. “He’s with that group of chinks every morning, in the park there, doing some kind of kung fooky shit. They always end with all of them just standing there like that.”

On my recent walks in the area, I had seen the Fury more frequently, but now it was confirmed to me that Frick and Frack had been closely monitoring me for a long time

Kelly was insistent. “I need to find out whose knife and blood that is. He was standing over it.”

Frick addressed me as if I were a long-time friend and confidant. “Chief, what’s the story on this knife and blood?”

Blue was anxious, about to say something, but held off when he saw me starting to speak. Now that the police were involved l knew Blue didn’t want anything to do with that knife.

“White Boy threw the knife there. He wanted me to pick it up.”

Kelly jumped back in. “That’s why I wanted to bring them down to the precinct. Murphy’s chasing the guy who ran away. These two guys know something about who he is.” Pointing at Blue. “This guy says he was just an onlooker, doesn’t know anything.”

The other undercover cop, Frack, jumped into the interrogation. “You’re an onlooker alright, ain’t you Mr. Blue. You never really see anything. You’re always just onlooking. You a professional onlooker, ain’t you?”

Frick wanted an answer from me. “Why did you say the runner was ‘white boy’? That’s your name.”

“Some people call me that, it’s not my name. This guy tags himself White Boy.”

Frick was angry now. “Whose blood is that?”

“It’s not blood. It’s paint or something.’’ I showed him the upper right arm of my leather jacket. “He spit it at me, on me, before he spit on the knife.”

Frick, more agitated. “How do you know this White Boy?”

“I don’t. I know his color. It’s the blood-red color of the paint in his tag. The White Boy tag is on practically all the graffiti around here.”

Except for his angry words to Blue, the undercover cop Frack had been silent. Now he approached intimidatingly as though about to strike me, shouting the same exact words White Boy had barked at me. “You know nothing!”

Frick put his hand on Frack to calm him and then turned to Kelly. “This is really some clown show shit. No crime here except wasting our time looking at it. That needs to be picked up off the street.” He pulled a leather glove out of his pocket, picked up the jackknife with it, closed it with his bare hand, then put the glove with the knife back into his pocket. “You want, go ahead, bring these guys to the station. Just don’t bring us into this stupidity.” He motioned to Frack. “Let’s go.” Frick and Frack walked back, climbed back into the Fury and drove off down Canal Street.

Kelly turned to Blue and me. “They seem to know you two guys pretty well.”

Kelly was a new kid on the block. I thought to test a little where his allegiances stood in the precinct. He was partnered with Murphy, a decent cop, so that was a good indicator. “I don’t know how well they know us, but we know them well enough.”

Kelly looked at me suspiciously. “What’s that mean? You know them.”

“Nothing more than that we know most of the cops in your precinct. Most have been up here at the Hill at least once or twice for some reason.”

Kelly’s radio went active. It was Murphy. “Headed back to the station. Where are you at?” Kelly replied. “Still at Canal and Chrystie. I’ll meet you at the house.”

Turning back to me. “What’s up with the paint? Who is this White Boy?

I decided to give this Kelly cop a piece of the White Boy story, calculating that I might find him an ally down the road, if and when I discovered more. “He’s one of the crazies, but he’s not stupid crazy. He’s not going to spit paint. For one thing, paint would stain. Look at it closer.” I turned my right arm jacket out so he could inspect it. “Wouldn’t it be crusting over or something by now. It’s still wet.”

“What, so now you’re saying it is blood.”

“No, not blood. I think it’s fake blood, stage blood. What they use in movies. And on Halloween. They sell it at costume shops. They even got little gel pellets you bite down on.”

Kelly grimaced and shook his head. “Tell you what, if I get my choice, this is the last time I look at any of this. It’s a clown show alright.” With that Kelly turned his back and walked down Canal Street toward the station. I could have told him that Frick and Frack knew this enactment was more than a clown show, but I couldn’t tell anyone that. Not yet.

I motioned to Blue to walk away from Charlie and Traffic Man, the other two onlookers at the fire barrel. When we were standing alone, I pulled the Tito knife out of my front pocket and offered it to him. “Thanks for throwing me your knife. You can have mine.”

“You had your own knife this whole time? What the fuck, Chief?”

“I saw that crazy fuck pull a knife on you. And I saw you just stand there.”

“He wasn’t going to do anything.”

“He spit on you!” Blue shook his head disapprovingly. “Never saw you not stand up before. No, I don’t want your knife. And I don’t want no part in no voodoo game or whatever happened here. Take it some place other than the barrel. This is our place.”

“I don’t know about voodoo. But it’s definitely not a game.” I walked over to inspect the ground with the stage blood. Where the knife had been…where the Polaroid had been. 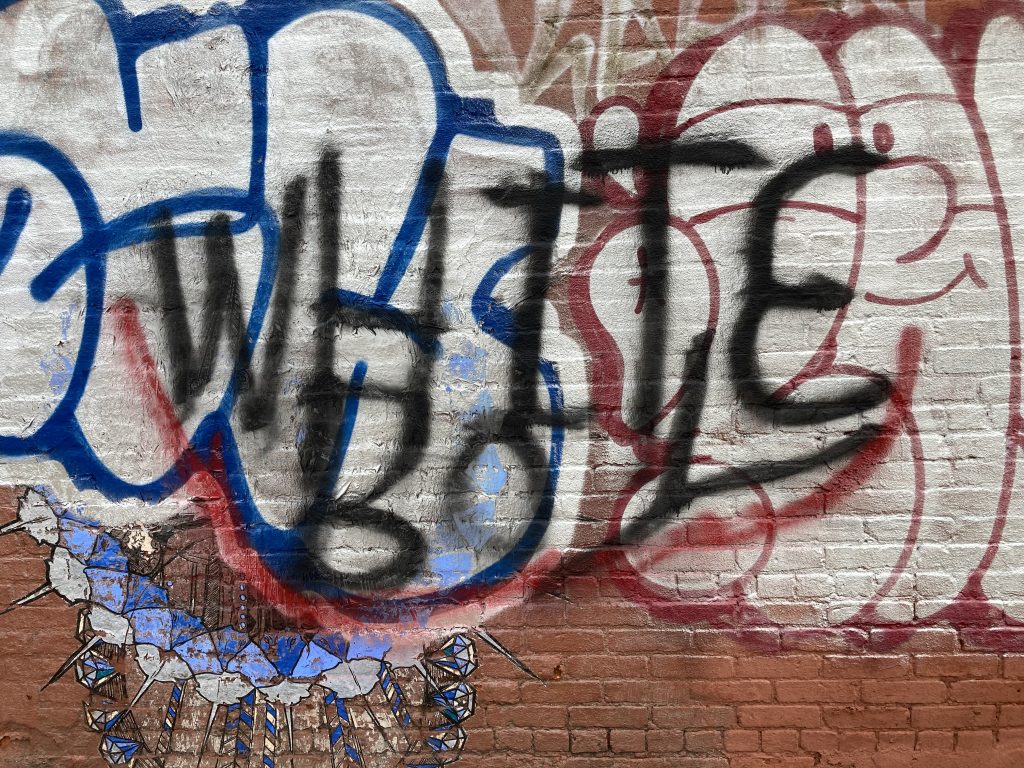 Visit this page to engage with Nick about hybrid literary genres crossing the fiction/nonfiction border. This inquiry is being written, and should ideally be read, contemporaneously with the excerpts For the section that is current to this post, use this bookmark link.

One thought on “Stage Blood”