By 1900, 7,000 Chinese had immigrated to the neighborhood, and Five Points was referred to as Chinatown. The Chinese Exclusion Act in 1882 had halted legal immigration from outside of America. It was a reaction to anti-Chinese sentiment, stemming from resentment about the willingness of the Chinese to work for far less money under far worse conditions than white laborers. The tongs served both as guardians against anti-Chinese violence perpetrated against the community and as a political force in the city.

The population in Chinatown at the time consisted of one female for every 50 males and the tongs became the main facilitators for the illegal importation of women from China. Many of these women were deceived into thinking they were coming to America for marriage, but instead ending up in prostitution.

In the 19th and early 20th centuries, the rival Hip Sing Tong and On Leong Tong, fought over control of the  business territories that included the profitable prostitution, gambling, and opium dens. These vice dens were taxed by the tongs to pay off the corrupt Tammany-era officials in the government.

These notorious turn-of-the-century violent battles became known as the “Tong Wars,” lasting from the 1890s through the 1930s. Their legacy continued through succeeding generations of Chinatown gangs. Today, the Hip Sing-descended Flying Dragons engage in turf wars with the On Leung-associated Ghost Shadows and the Division Street Boys.

The Exclusion Act was law for sixty years. It wasn’t lifted until after World War II, and although only a small immigration quota was given to China, the population of Chinese grew throughout the 1940s and ’50s. When the immigration quota was raised significantly in 1968, Chinese flooded into the country from Hong Kong and the mainland. Chinatown’s population exploded, expanding north into Little Italy and east into the Two Bridges neighborhood.

For much of the 20th century, the neighborhood east of the Hill, Two Bridges, was mainly populated by European immigrants. Later, Latin American immigrants moved in, especially Puerto Ricans, joining the already diverse Jewish, Italian, Irish, and Greek population. A significant number of Vietnamese and Burmese Chinese joined the melting pot. In the 1980’s the neighborhood became the primary destination for immigrants from Fuzhou, China. They eventually became the majority population, and Two Bridges became known as New Chinatown or Little Fuzhou.

The Fuzhou immigrants became part of the larger Cantonese-dominated Chinese community, but many of them were unable to speak Cantonese and had no papers. Their illegal status meant that the only work available to them was as sweatshop seamstresses or dishwashers/waiters in restaurants. The estimated 600 sweatshops made Chinatown the clothing manufacturing center of the city. Out of necessity, many of these new immigrants turned to crime. Little Fuzhou became the center of Chinese organized crime in America, rivaling La Cosa Nostra, and supposedly taking control of heroin smuggling in the country.

An estimated 50,000 Chinese now lived in the 40-block radius of Chinatown, giving Nеw Yоrk City the lаrgеѕt Chinese population in the Western Hеmіѕрhеre. But when we arrived at the Hill, Mister Lee and the Geomancer were the only Chinese of the fifteen or so residents, so it was a very peculiar enclave to be centered in the middle of the largest Chinatown in the United States.

The Hill was a model of diversity. It was as though all the ethnic and racial conflicts throughout history over this small piece of turf had been reconciled, as though all the ghosts of America’s original melting pot had joined the living to dance again. White, Black, Asian, Hispanic, and Arab all living and interacting with one another in like-mindedness, with a joint concern to protect the one-acre turf that sheltered their enterprises and provided them a home, a community. Although the four brothers and the other Jersey white boys were the primary gatekeepers and authority, their rule was more benevolent than malevolent, and the kingdom was relatively peaceful. Only when Coco started selling heroin out of Tito’s old hut, did the racial tension, conflict, and ultimately violence begin to emerge.

I suspected that Coco’s drug selling, besides the obvious unwanted scrutiny it would bring to the Hill, might also be tied to the Little Fuzhou gangs vying for control of the heroin trade in the city and the country. The geographic midpoint between Little Italy’s Mafia family to the west and the Chinatown tongs and gangs to the east, the Hill was now the center of the nationwide drug war…. the Mouth of the Dragon.

Coco was working for one of the drug lords, who in turn was being supplied by one or the other factions. Any hierarchy beyond these street-level drug sales was purposefully inscrutable, not just to the police, but to the players themselves. No one knew who was who in the war zone. With all the unknowns, my only viable path toward determining what actions to take, or not take, was to lay bare the underlying metaphysics in my daily rituals and in the geomancy of the landscape. 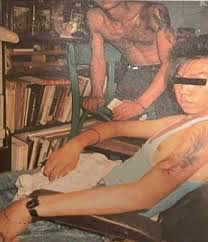