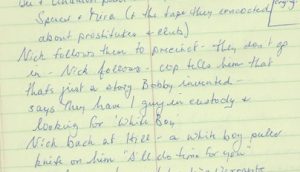 The story blew up on my feet one day. A flash of color caught my eye. When I first saw the Polaroid, I never realized its true nature. Now at this same intersection at Canal and Chrystie, three years after I bent down and picked up this strange object, I would, or would not, have a knife fight with someone I had never met. He seemed to know me. He was standing about six feet away. He pulled a six inch jackknife out of his front pocket and opened it. I nodded toward what was across the street. He glanced briefly at the two cops standing at the entrance of the shantytown. They were only thirty yards away but their backs were to us and they were talking to someone.

He sneered back at me. “I don’t mind doing some time for ending you.”

He moved back and forth in a slow half circle around me, then he spit at me. I saw his spit hit my jacket’s right arm. I looked at it and then back at him. It wasn’t spit on my arm. It looked like blood. It was also dripping out of his mouth. His eyes widened, “Whatcha gonna do?” His blood, his DNA, in search of mine. His story was trying to mate with mine.

Three of the locals were a couple yards away warming at the corner fire barrel. “Hey, Chief.” The one called Blue pulled his knife out, opened it, then tossed it to the ground near me. Even in this tense scene, or maybe because of it, I intuited some grander design unfolding. The memory of that Polaroid flashed before me. Blue’s knife landed at the exact spot where I had picked up that portent three years earlier.

In all animals, evolution and instinct take over in dangerous situations. A physiological reaction stimulates the sympathetic nervous system. But a threat does not always result in immediate fight or flight. There is a period of heightened awareness, during which each animal interprets behavioral signals from the other. Body language communicates rank and intention. There may be a negotiation, resulting in playing, mating, or nothing at all. This instinctual reaction would be the obvious explanation for the bearing I assumed, except that I was also practiced in another posture. After three years of habitual training, this posture had become just as instinctual and physiological. Facing the threat, bending at my knees, moving purposefully as if to pick up Blue’s knife, I instead rose slowly into a pose, the knife remaining where it was on the ground. Hands at my side, palms facing body, fingers neither open nor closed, knees bent naturally, breathing in meditatively through my nose. The Qigong exercise of standing like a tree.

I knew who he was now, I had been searching for him the last two years. White Boy walked cautiously up to me, knife in hand, but arm relaxed at his side, “What’s wrong with you. You want to die?”

We were looking each other directly in the eye. I spoke gently but with conviction, “We both know that’s not going to happen.”

He stepped back angrily, turned and glared momentarily at Blue. He then spit on the knife at my feet and screamed, “You know nothing!” He started walking away, glaring sideways again at Blue as he left.

White Boy’s shout had caught the attention of the two cops who walked quickly towards us to investigate. I was “standing like a tree” in the middle of the street with a knife at my feet.

Blue jumped out to meet the cops as they approached, pointing at White Boy walking away. “He had a knife out.”

One of the cops opened his gun holster and shouted, “Police officer, stop!” White Boy sprinted away with the cop in cursory pursuit.

The other cop called the chase in on his radio and then walked up to me. I was still standing like a tree. He saw the knife at my feet and unbuckled his gun holster. “Get down on the ground.”

I eased out of the posture and raised both my hands slightly. Blue protested from the sidelines, “That’s not his knife, that’s the other guy’s. The one running away.”

The cop relaxed somewhat. “Are you that guy with the tipi?” I nodded. “Why are you standing in the middle of the road like that?”

“That guy pulled a knife on me.”

He pointed to the knife at my feet, “That knife? Whose blood is that?” The cop tensed slightly, his hand moving again to his gun.

Blue was visibly agitated. “That runaway voodoo hoodoo motherfucker spit on it.”

“That’s blood down there, not spit. Whose blood? Both of you need to come to the precinct.”

“You need to catch that freak show that ran away. Take him to the Tombs, not me.” Blue looked like he was ready to run.

“I said to the precinct, for questioning. Why would you be going to the Tombs? Is there a warrant on you? Show me some ID.”

“I ain’t got no warrant. I was just warming at the barrel when that crazy fuck showed up. Him and Chief there, they had something going on. I was an onlooker. Onlooking ain’t no crime. Why you need me at the precinct?”

“For all I know that’s your knife, or your blood, on the knife.”

Blue opened his jacket and stuck out his chest. “Do I look like I’m bleeding?

“You’re a fucking witness. You’re going to the precinct.”

“Witness to what? I was an onlooker like these other onlookers here.” He gestured at Charlie and Traffic Man who were standing at the fire barrel watching. “You going to pull all the innocent onlookers down to the precinct?”

“No, just the talkers like you. I told you to show me some ID.”

An unmarked car pulled up to the intersection. Two undercover cops got out. They were anything but undercover here. Everyone on the Hill and the surrounding area knew them and their car. Frick and Frack Fury aka Frick and Frack Mikey. “Mikey” had replaced “Five O” as the alert signal that was shouted or whispered when police were spotted. The dirty cop Michael Dowd and other police in the 75th precinct had been headline news a year ago. Frick and Frack Mikey were dirty cops of the same mold. The media claimed that at the same time as the Michael Dowd scandal unfolded there was an investigation into corruption at the 5th Precinct, but everyone on the street knew nothing had or ever would change with Frick and Frack Fury.  “Fury” because of the unmarked Plymouth Fury they drove and because of the fury and violence they sometimes bestowed on their prey. 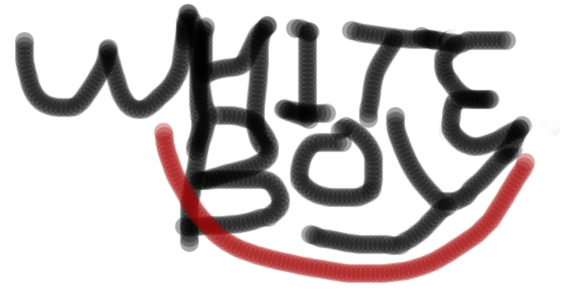